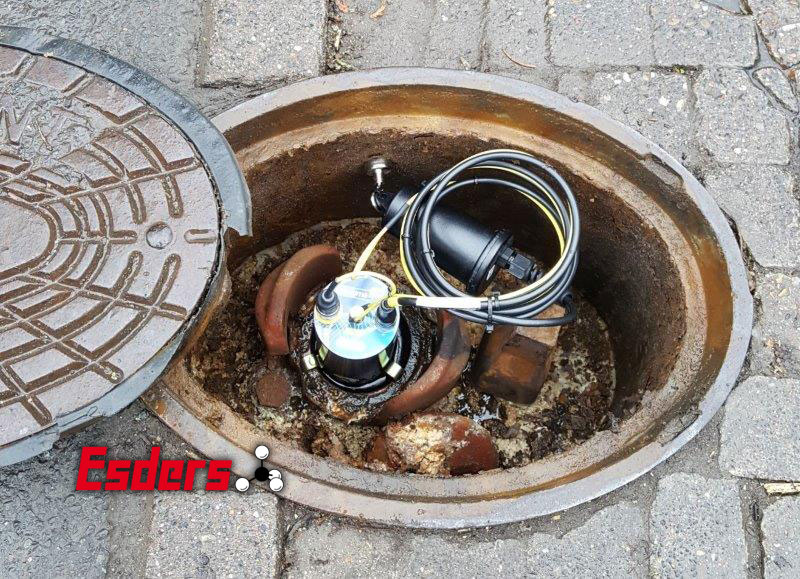 - an advanced warning system that conserves water and human resources.

Climate change and shortage of qualified staff dominate the social agenda and water suppliers also struggle with these challenges: Water is precious; more so than ever during hot spells. Leaks must therefore be found quickly and water losses must be curbed. However, network monitoring, leak detection and repair require high personnel resources. The potential of automated leak detection opens up a way out of this dilemma.

Last year’s summer of drought subjected the drinking water supply in many places to a real stress test. Municipalities and suppliers called for water saving, withdrawal bans and restrictions on use were in the air. According to many studies, the creeping effects of climate change on the available groundwater resources are already evident. According to the German Federal Environment Agency (Umweltbundesamt), more than 70 percent of drinking water in Germany comes from groundwater.

This makes it all the more important to keep leakage times in the water distribution network to a minimum. However, the common method often has a long latency between the occurrence of a leak and its location, and is also very personnel-intensive. The supply industry has to fight the shortage of skilled workers even more than other industries. Two figures that illustrate this: In the Free State of Bavaria, there are just 60 trainees for every 3,300 water suppliers, who will complete their training as water supply technicians in 2018. “Far below demand”, Jörn-Helge Möller, Managing Director of the Bavarian chapter of the German Association of Gas and Water Professionals told Bavarian Radio in spring.

With Enigma3m, the Esders GmbH offers a procedure that automates leak detection to a large extent. Based on qualified logger and GIS (Geographic Information System) data, occurring leak noises are correlated at night via cloud computing. The supplier thus receives a reliable picture of the situation in the investigated network section every morning and can act immediately. If the correlating noise loggers Enigma3m are proactively exposed to monitor endangered network sections, leaks can often be located and repaired within 24 hours. Thus, the method saves resources, water and personnel. Moreover, it has already proven itself many times in practice, e.g. in a scientifically accompanied pilot test with 33 Enigma3m loggers at IWB, the public power supply company of the canton Basel-City in Switzerland.

The standard procedure for locating leaks is usually a five-step process: a first pre-location using a contact microphone is followed by a second pre-location using a noise logger, which further delimits the damaged area. In the third step, the exact location of the damage is pinpointed with an above-ground correlator. The leakage noises recorded at several points in the pipe system are correlated with each other. The exact leakage position is calculated on the basis of the time differences with which the sound reaches the respective contact points. Fourthly, after the leak has been confirmed by a ground microphone, the damage can be repaired. Further smaller leaks are likely to occur in the vicinity of pipe bursts caused by uplifts, settlements or construction activity, the leak noises of which have been superimposed by the repaired damage up to that point. In the fifth step a comprehensive follow-up check is carried out. Most of the suppliers work on an ad hoc basis: If leakage is suspected, the noise loggers are suspended and collected and read out again after recording. Experience shows that suppliers estimate 15 to 20 man-hours for the personnel expenditure from the first suspected leakage to the point of location. However, more and more suppliers are starting to monitor risk areas routinely and permanently by permanent logger installation. The logger data are then periodically collected by means of remote readout. For this purpose, employees must regularly drive around the monitored area by car (“drive-by solution”).

The monitoring within the water loss management of IWB in Basel was similar to that described above. Their water distribution network is divided geographically into five pressure zones: In zones two to five, with around 80 kilometers of pipe network, noise loggers were exposed once a year, and after recording, they were manually collected and read out. In zone 1 with a network distance of about 420 kilometers, loggers were permanently installed and read out quarterly via “drive-by”. “In the worst-case scenario, i.e. if damage occurs shortly after the regular readout, this means leakage periods from the time the leakage occurs until the water supply company becomes aware of the leakage, of up to three months in zone 1 and up to a year in zones 2 to 4,” says Michael Gauer, who now works as a plant engineer in IWB’s water loss management department. For his master’s thesis at the University of Applied Sciences Northwestern Switzerland FHNW Muttenz entitled “Water loss assessment and leak monitoring”, Gauer evaluated the sensitivity of four different leak detection systems with remote transmission of noise data in summer 2018. For this purpose, real leaks were partly used or leaks with different noise levels were simulated at underground hydrants. Furthermore, a criteria catalogue with 16 technical and economic sub-categories was developed for the standardised evaluation of the systems.

All evaluated devices send the noise data recorded during the night by mobile service. In two systems, however, an independent network must be set up and maintained between the logger and the data transmission unit for proprietary short-range radio. This requires above-ground installations, for example on the fronts of houses and street lamps, which are costly and unfortunately often the target of vandalism. In addition, if the loggers are moved to another monitoring area, the entire communication infrastructure must be reinstalled. The other two systems, including Enigma3m, access the local mobile network autonomously and send the measurement results directly from the underfloor cap to the server. Whereby the roaming SIM card built into the Enigma3m automatically dials into the mobile network with the best coverage at the logger location, which further increases the reliability and effectiveness of monitoring. IWB’s network monitoring, for example, offered five different mobile networks to choose from. The self-sufficient mobile network makes the entire system very flexible. It can therefore be moved to another network section quickly and with manageable effort.

Two of the tested systems alarm when a critical noise level is exceeded. However, they are exclusively level driven: the exceeding of a sufficient/defined noise level triggers an alarm, whereupon the user correlates the noise data by manually triggering the process. Disadvantage: In case of quiet leaks, be it due to the size of the leak or the distance to the logger, the critical noise level is not reached and the leak continues “under the radar”. The other two systems, including Enigma3m from Esders, are correlation-driven: they automatically correlate the recorded sounds on a web server. The Esders server not only merges sound and correlation data. Prior to measurement, the pipeline data is automatically imported from the utility’s Geographic Information System (GIS). The server can then work with the stored pipe plans and the information on material properties, nominal widths and diameters of pipes. Subsequent structural changes can be easily digitally added using the “Draw pipe” function or completed by an update from the updated GIS. The more accurate and detailed the GIS is, the more precisely Enigma3m can correlate. Enigma3m correlates up to seven nights with three measurement intervals each to eliminate disturbing noises or random large water withdrawals during a measurement.

Systems with automatic correlation showed the best results in the study. They located leaks by correlating the noise data to within one meter. The average accuracy of the point correlations of Enigma3m was 0.39 centimeters for the real leaks, which is well below half a meter. Also, Enigma3m correlates recorded noise data always independent of the volume. Thus, even small simulated leaks with a comparatively low noise level were located in Basel.

Michael Gauer’s research design distinguishes between main and secondary criteria, with different weightings. The main criteria were the accuracy of the correlations, correlation functions, interpretability of the correlation results and the leak detection rate of the respective system, i.e. how many of the real and simulated leaks were found by the system. In the overall evaluation, the correlating sound loggers Enigma3m from Esders delivered the best results. This was mainly due to the significantly higher leak detection rates of the Esders devices and the high accuracy of the point correlation of 0.39 meters on average. A further added value is the intuitively designed user interface of the Enigma3m web portal for monitoring pressure, flow and leakage in the water network. “The web application reduces the system to the essential functions, which speeds up the learning curve” says Michael Gauer.

Excavations to repair leaks could be started on site in Basel after a short period of securing with a mobile correlator and ground microphone. Thus Enigma3m reduces the above mentioned five-step procedure to the two steps of automated correlation and point location on site, the follow-up control of the leak environment is guaranteed with permanent monitoring. Compared to the 16 to 20 man-hours mentioned above, leaks could be digitally located and targeted within a short time at the beginning of the working day. The confirmation on site by mobile correlator and ground microphone was accomplished within 90 minutes, so that the time required for point location amounted to a maximum of three hours, depending on the distance.